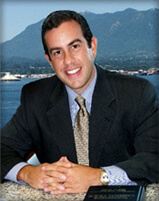 I am a criminal defence lawyer. I have been called to the bar in British Columbia and Ontario. I completed my LL. B. at Osgoode Hall Law School and also have a B.A. in political science from the University of Western Ontario.

I am a member of the Law Society of British Columbia, the Criminal Law Section of the B.C. Branch of the Canadian Bar Association, and the Vancouver Trial Lawyers Association.

In 2001, I was retained by the Supreme Court of British Columbia to provide services as Special Counsel to the Court for the Air India trial, the longest and most complex criminal trial in Canadian history. In addition, I have a unique understanding of all aspects of the Canadian criminal justice system as I have occasionally been retained to conduct prosecutions for the Crown.

My experience has equipped me with a unique set of skills to assist you in the defence of any criminal charges that you are facing. If you would like to discuss your case and how I can help you, contact me by phone to schedule an in-person consultation.