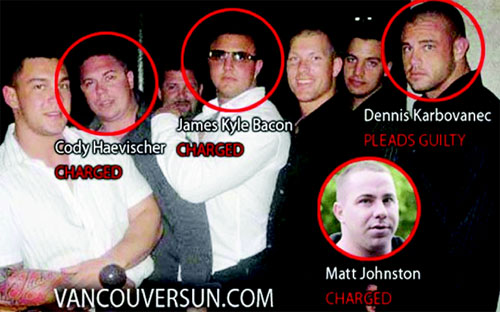 METRO VANCOUVER – Four members of the Red Scorpions gang have been arrested in connection with the worst gangland slaying in B.C. history: the execution of six people in a Surrey highrise 18 months ago.

One of the four, infamous gangster Dennis Karbovanec, pleaded guilty Friday in B.C. Supreme Court to three counts of second-degree murder for shooting three of the victims, and to conspiring to kill a fourth.

His associates, Jamie Bacon, 23, and Cody Rae Haevischer and Matt Johnston, both 24, were expected to be charged with murder and being Co-conspirators today after being nabbed at gunpoint Friday by Emergency Response Teams.

Karbovanec admitted he shot Chris Mohan, an innocent passerby, as well as drug dealers Michael Lal, 26, and Ryan Bartolomeo, 19, in a penthouse on the 15th floor of the Balmoral Tower highrise on Oct. 19, 2007.

Mohan’s mother Eileen said she could barely believe what she was hearing as she sat in courtroom 20 Friday and listened to the 27-year-old confess.

“It was very emotional, almost like reading a story book, but in fact it was reality,” Eileen Mohan said.

She said she was “wishing I was not sitting in the courtroom, but sitting with my Chris at home. When my son’s name was said out, it seemed as Chris was going to walk out and come to me.”

She burst into tears as other victims’ relatives also got emotional.

“One side of me is in pieces and the other side tells me that it is one positive outcome, all because of the tireless work of the Integrated Homicide Investigative Team,” Mohan said.

“They always told me to have patience and believe in them. I have placed my belief in the IHIT team and this is the outcome of my belief. Today, I feel I am walking with my son once again.”

Bacon, Johnston and Haevischer and a mysterious “Person X” are named in the indictment for allegedly conspiring to kill Corey Lal, a 22-year-old drug dealer operating out of suite 1505 with his crew.

The indictment suggests that the other five who were shot in the head that day, including fireplace repairman Ed Schellenberg, 55, were not the intended targets of the murder plot.

Lal’s brother Michael, 26, was also slain, as was Eddie Narong, 22, an original member of the Re Scorpion gang.

Karbovanec will be sentenced before Associate Chief Justice Patrick Dohm on April 9.

Karbovanec was out on bail on a series of charges, including 11 related to possessing a loaded automatic weapon and silencer, when the surprise news of his plea broke. Just two weeks ago, Port Moody police issued a statement saying the targeted gangster – who the public had been warned to stay away from – had moved away. There was no mention of his new community, prompting many to speculate he had gone into police protective custody.

Chris Mohan, who lived across the hall from the death penthouse, had stayed home that afternoon to wait for the fireplace man. He would have just been leaving for his basketball game when the killers arrived.

The Lal brothers, Bartolomeo and Narong, were selling drugs in the Surrey central neighbourhood an had at one time been aligned with some of those now charged. But a dispute arose over profiting without paying a tax back to the Red Scorpions, The Vancouver Sun has learned.

Schellenberg’s brother-in-law, Steve Brown, said he was relieved about both the charges and the guilty plea.

“My head is spinning,” Brown said.

Brown had left Schellenberg, his work partner, just a few hours before the murders in the late afternoon on that rainy, cold Friday. Schellenberg also sent home his nephew, who was working with the pair, saying he would finish up the job.

Brown said credit has to go to police who worked tirelessly on the case.

“They have had two teams of detectives working full-time and all the credit goes to the police,” Brown said. “We need to get justice for Ed so that his wife Lois and his two adult kids can have closure.”

Cpl. Dale Carr, of the Integrated Homicide Investigations Team, read a statement at a news conference Friday, but would not take questions.

A bigger news conference was planned for 1 p.m. today at Surrey RCMP headquarters with victims’ families in attendance, Carr said.

The much-watched Abbotsford home of the notorious Bacon clan was surrounded by police about 10:30 a.m. Friday to take Jamie into custody at gunpoint. Both marked and unmarked vehicles closed off the street and police put up a spike belt to prevent anyone from escaping. Dogs were also on hand.

Three of the four accused in the murder travelled to Mexico together in late 2007 and The Sun obtained a photo of them posing together. Also in the picture are Bacon’s oldest brother Jon and Kevin LeClair, who was gunned down outside a Langley mall Feb. 6.

LeClair’s murder came three days after the assassination of Raphael Baldini, who was renting the suite in the Balmoral Tower where the murders took place.

Jamie, Jarrod and Jamie Bacon – all out on bail until Friday on other charges – as well as Karbovanec had been targeted for death by rival gang members, prompting four public warnings by police to stay away from them. Most of the threats came from the United Nations gang.

New Democrat critic Mike Farnworth said he hopes this is just the beginning of more charges. “I think this is excellent news. The public has been waiting for this,” Farnworth said.

Surrey Mayor Dianne Watts said her community will sleep easier tonight because of arrests in the Surrey Six case.

“It was a horrific event for the community and for the families involved and to have this significant piece come to a close where arrests have been made is important,” Watts said.

She said the trial will be another “journey for the families that they will have to go down.”

Watts said there was public frustration over the last several months when the Surrey Six case appeared to have gone cold.

But police were diligently working away to solve the murders and couldn’t let the community in on all the inside developments, Watts said.

“That information just cannot be made public. That is a double-edged sword, because you want to make sure that the general public has that confidence that things are happening, but then again you can’t speak to it because the investigation is underway,” Watts said. “If any information was given away in terms of this particular case, then it was going to compromise the investigation.”

She said the charges should reassure people the police are tackling gang crime.

“We have to have that level of trust that the RCMP are doing their job, and they are going to make the appropriate arrests in due course and that’s exactly what they have done,” Watts said.

“When you have got individuals that have absolutely no regard for human life, it is a good day when we can get them off the street.”